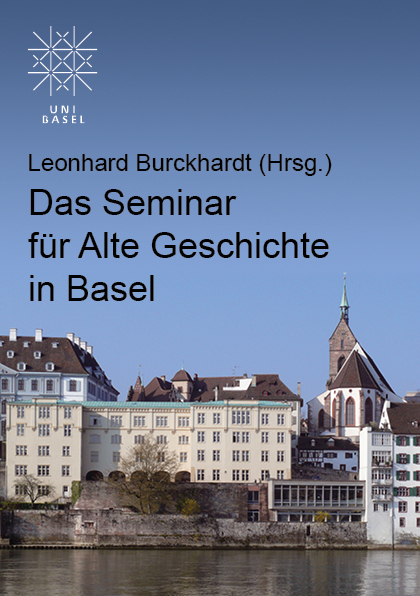 The publication of this brochure on the history of the seminar of Ancient History of the University of Basel coincides with the dissolution of this institution. In the summer of 2010, the seminar of Ancient History will become part of the Department of Ancient Civilizations, which will be housed in a new building in the Rosshof, and will thus be absorbed into a larger university unit. The occasion for looking back is not the end, but the 75th anniversary of the founding of the seminar in 1934, which was celebrated the year before. Thus, a high point in its history coincides with its end as an independent unit in a strange temporal coincidence. After all, Ancient History remains a separate cost center within the university budget ...

The anniversary was celebrated in December 2009 with a conference entitled "Neues aus der Alten Geschichte? On the state of research in a systematic and historical perspective. Well-known specialists discussed developments and tendencies in central sub-segments of the subject such as the history of political forms of organization, of house and family, of foreign policy, of religion, of economy or of the military. The aim was to gain an overview of the situation of ancient history and the directions in which research can develop in the face of new theoretical and methodological challenges. Beyond this substantive assessment of the current situation, some contributions - with special attention to Basel - were devoted to the institutional and structural history of the discipline. Two of the latter are published in this booklet, namely Jürgen von Ungern-Sternberg's lecture on the history of ancient history at the University of Basel and that of the Bernese Ordinarius for Ancient History, Stefan Rebenich, on the institutionalization of ancient history in the 19th and 20th centuries.

Attached is the article with congruent content, already published in the Basler Zeitschrift für Geschichte und Altertumskunde, by the freelance historian Diemuth Königs (Olsberg), who earned her doctorate in ancient history in Basel, entitled Die Entwicklung des Faches 'Alte Geschichte' an der Universität Basel im 20. Jahrhundert. This documents a phase of historical engagement with antiquity in Basel, during which ancient history mainly strove to gain and maintain its mediating position - given anyway by its subject positioning - between classical philology and ancient history on the one hand and general history on the other, also institutionally and in the curricula.

Of course, the history of the seminar also reflects developments, trends and needs of the history of the university and society in general. Stefan Rebenich's contribution deals with these premises of the history of science and especially of disciplines, under which the founding of the seminar took place, but which were virulent at all German-speaking universities. According to this, the process of discipline formation was accompanied by the emergence of a 'scientific community', the formation of discipline-specific rationality criteria for the evaluation of research achievements, and thus a standardization of ancient historical behavior. The increase in the degree of organization of scientific activity, its 'bureaucratization' and specialization as well as its professionalization thus did not leave Basel's ancient history untouched. These factors, in addition to moments peculiar to Basel, were in fact essential impulses for the founding of the local seminar.

Against this background, von Ungern-Sternberg presents the fate of the subject even before its institutionalization in Basel; Königs' article - partly parallel to von Ungern-Sternberg's - sheds light on Basel's ancient history in the 20th century until the resignation of Christian Meier in 1976. The appendix to von Ungern-Sternberg's article, in which the files on Christian Meier's appointment proceedings are evaluated, deserves special attention: They bring to light the various interests and positions, some of them very much at odds, that can influence such a process and give it a sometimes rather unexpected direction.

Of course, historians always feel like turning to the past (especially one that has a significant impact on their own existence) and they do not always want to have to justify it: But this booklet has first of all a documentary character, so it should make easily accessible to all interested people, from as neutral a point of view as possible, the facts that shaped the history of the seminary. In this sense, all scientists are mentioned with their functions, who have worked here as permanent employees or as lecturers. However, this retrospective on a given occasion is also intended to show which general circumstances and which specific factors led to the founding of the Seminary and had a decisive influence on its history. In this way, it may serve as an example of the existence, development and usefulness of a small academic subject.