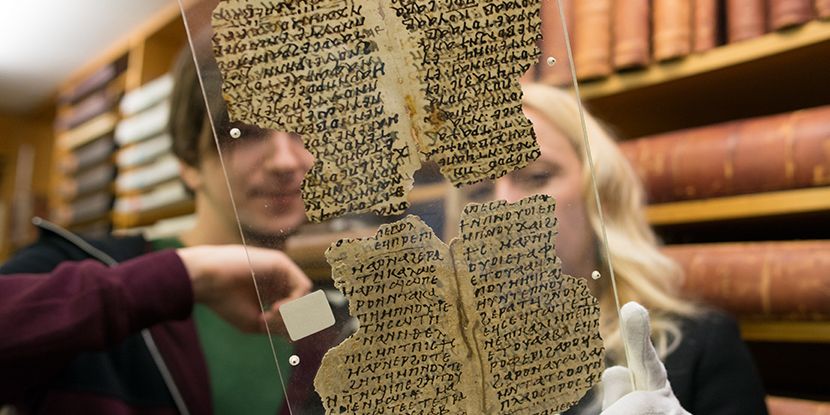 The University Library in Basel is in possession of a small papyrus collection of 63 papyri from Ptolemaic, Roman as well as late antique times in mainly Greek, but also hieratic, Latin, Coptic and Middle Persian. The Voluntary Museum Society of the City of Basel acquired them for the University Library in 1900, making Basel one of the first universities to own a collection of Greek papyri.

What are papyri anyway and what is papyrology?

Papyrus was the ancient paper, universally used by all classes of societies for all sorts of everyday transactions. It was made from the pith of the papyrus tree. Papyri have survived for millennia in the desert sands due to the favorable dry climate of Middle and Upper Egypt - whether in the familiar roll form, deposited by the former owner and then left behind, as 'waste paper' in ancient garbage heaps, or reused for mummy cardboard.

The papyri provide us with insights into the lives and daily routines of ordinary people and, within the context of ancient lore, represent a particularly fascinating genre of text because of their immediate and personal nature. We learn from the papyri something about the everyday life of the people, their economic situation, their marriage and family life, their diet, health, illness and death, the relationship between the generations and the relationship and distribution of roles between women and men.

The Edition of the Basel Papyrus Collection

The papyrus documents of the Basel collection, preserved between plexiglass plates, are stored in two drawers in the Collection of Ancient Manuscripts in the Special Reading Room of the University Library of Basel. In the early 20th century, Ernst Rabel (Basel 1906-1910), a professor of legal history at the University of Basel, took up the collection and edited a few selected texts. But he left it at a selection of 26 papyri, which he published as "Papyrus Documents of the Public Library of the University of Basel" during the 1st World War in 1917. A further volume with the remaining papyri in Basel never existed, mainly because Rabel left again already in 1910 and in the following period the papyrus collection fell into oblivion.

This is where the Basel Papyrus Project of Ancient History, funded by the SNF, started. The edition project, led by Sabine R. Huebner and funded by the Swiss National Science Foundation from September 2015 until August 2018, aimed to complete a complete reappraisal of the collection. The Digital Humanities of the University of Basel took over the digitization of the collection. The goal was the complete new or first edition of all Basel papyri in print form in the supplements of the Archive for Papyrus Research as well as the provision of the digitized papyri with metadata on international data portals accessible in open access such aswww.papyrusportal.de andwww.papyri.info.

Much has been achieved during the 2015-2018 funding period. All papyri of the Basel Papyrus Collection have been digitized, transcribed, annotated and translated. The edition of the Basel papyri have been accepted for publication in the series 'Beihefte des Archivs für Papyrusforschung' (DeGruyter). Furthermore, during the years of the project, papyrology and the Basel Papyrus Collection have grown to become an important core of Basel Classical Studies. Thanks to this project, Basel Ancient History has been able to establish itself as a central international contact point for young scholars in the field of papyrology and has established itself as an international center of excellence for the study of Greco-Roman Egypt.

The edition of the Basel Papyrus Collection has brought to light some sensational finds. Based on propopographical research it could be shown that the Basel papyrus letter P.Bas. 2.43 is the oldest Christian autograph. The letter dates to the 230s and is thus about half a century older than the earliest Christian evidence among documentary papyri. The use of the nomen sacrum "I greet you 'in the Lord'" clearly identifies the letter writer as a Christian. The letter reveals to us insight into the world of the earliest Christians in the Egyptian hinterland about which the literary sources leave us completely in the dark. The two Christian brothers in the letter hold political offices and belong to the local upper class of their city. The location where the papyrus was found could also be reconstructed. It comes from the village of Theadelphia in the northeast of the Fayum and belongs to the famous Heroninos Archive, the largest papyrus archive from Roman times.

Furthermore, thanks to archival studies in international papyrus collections funded by the SNSF, it has been established that the unpublished fragment P.Bas. inv. 42 belongs to a papyrus in the British Library(P.Lond. 1013). The two fragments are now published together in the edition volume of the Basel Papyri. Furthermore, we found that the Basel fragment P.Bas. 7 belongs to an unpublished papyrus in the collection of the University of Michigan in Ann Arbor(P.Mich. inv. 3958), which was also consulted and co-edited.

In the case of the papyrus P.Bas. 1A, a text in "mirror writing" belonging to the papyri in Basel since the 16th century, it was determined that it is several layers of papyrus glued together with glue, which transmit fragments of a medical treatise from the 2nd/3rd century. The "mirror writing" was created by the imprint of wet ink. A professional restoration including separation of the papyrus layers, the prerequisite for a transcription and edition was carried out by the papyrus restorer, Jörg Graf from Leipzig in April 2018. The transcription by the Post employee Dr. Isabelle Marthot-Santaniello took place in May/June 2018.

Furthermore, apart from the known Greek and Coptic papyri, a Persian parchment was discovered at Pahlavi, co-edited by a local resident colleague, Dr. Stefanie Schmidt. Five literary papyri were also identified during the project: two of the four fragments of P.Bas. inv. 27 contain verses from Homer's Iliad, the two other literary fragments contain a previously unknown text, and P.Bas. inv . 41 is a new Christian epigram by an unknown author.

Archival research at the Bavarian State Library in Munich and the National Library in Strasbourg uncovered rich material on the origin and history of the collection's purchase in Egypt in the winter of 1899, which was processed for the introduction to the edition volume.

An exhibition on the Basel Papyrus Collection at the University Library of Basel, conceived by the project team and running from February to April 2017, met with great interest from neighboring subjects as well as the Basel public. As part of the project, we also organized the First Swiss Papyrology Day in Basel in February 2017, which brought scholars working in papyrology from Switzerland to Basel to report on their ongoing research. Prof. Andrea Jördens (Heidelberg), Director of the Seminar for Papyrology at the University of Heidelberg and President of the Association Internationale de Papyrologues, gave the Keynote Lecture on "Swiss Papyrology and Swiss Papyrologists."

In addition, the project launched a conference series ("New Approaches in a New Generation: Studying Graeco-Roman Egypt") that calls young papyrologists to Basel once a year to present their new approaches and research methods in the field of papyrology. The first took place in December 2017, the second in September 2018.

In parallel with the processing and editing of the Basel papyri collections, we have also offered several courses for students of ancient history and neighboring subjects on the introduction to papyrology and on coding on papyrological databases as part of the project, which have met with lively interest and are now firmly established in the teaching program each semester. International papyrologists were invited for workshops: Dr. James Cowey (Heidelberg) offered a workshop on coding for the online database Papyri.info. Dr. Rodney Ast (Heidelberg) offered a "Digital Humanities training" in three sessions, two on coding and one on the history and future development of papyri.info. 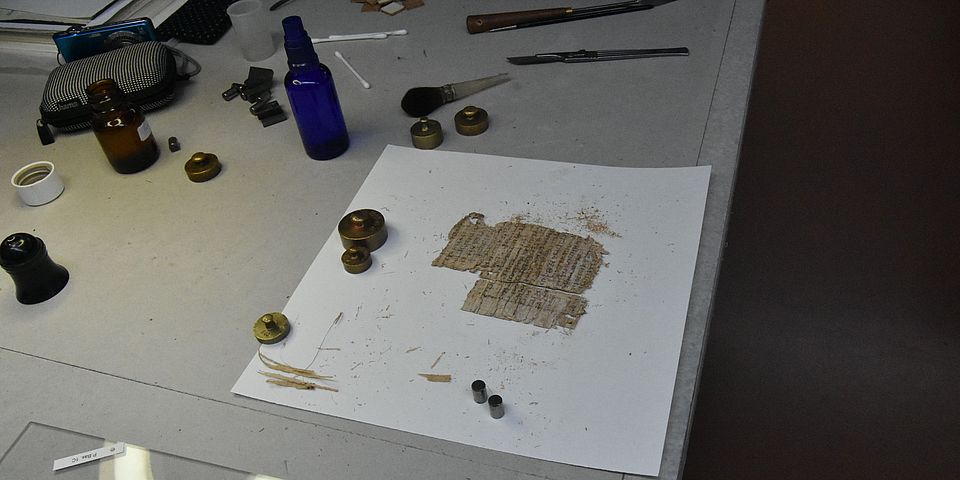 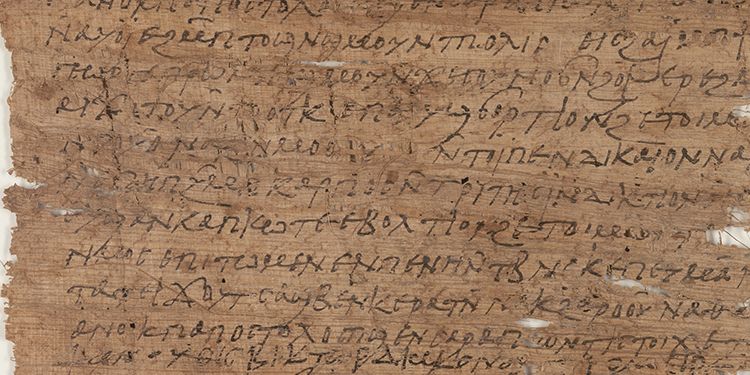 A millennium on the Nile 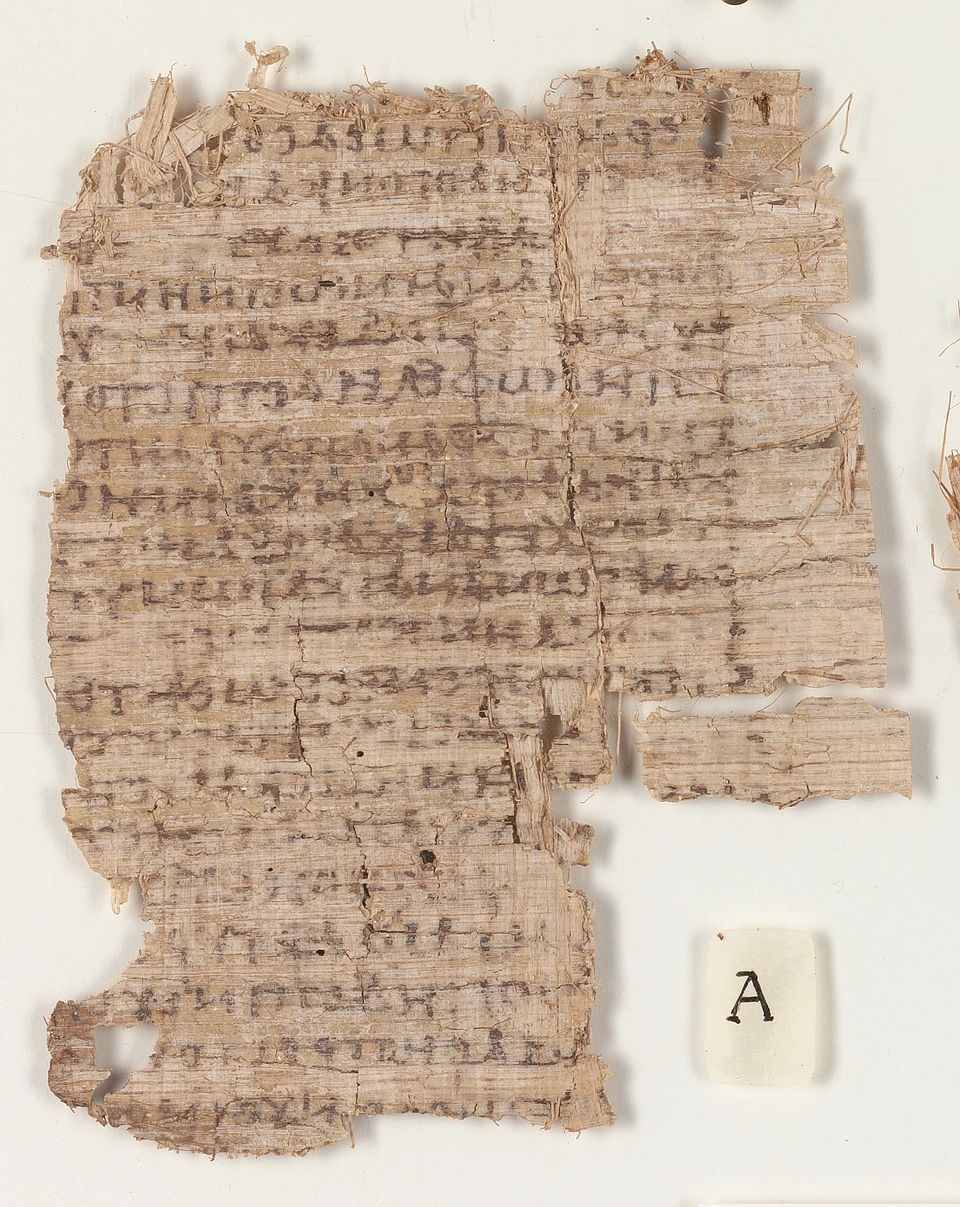